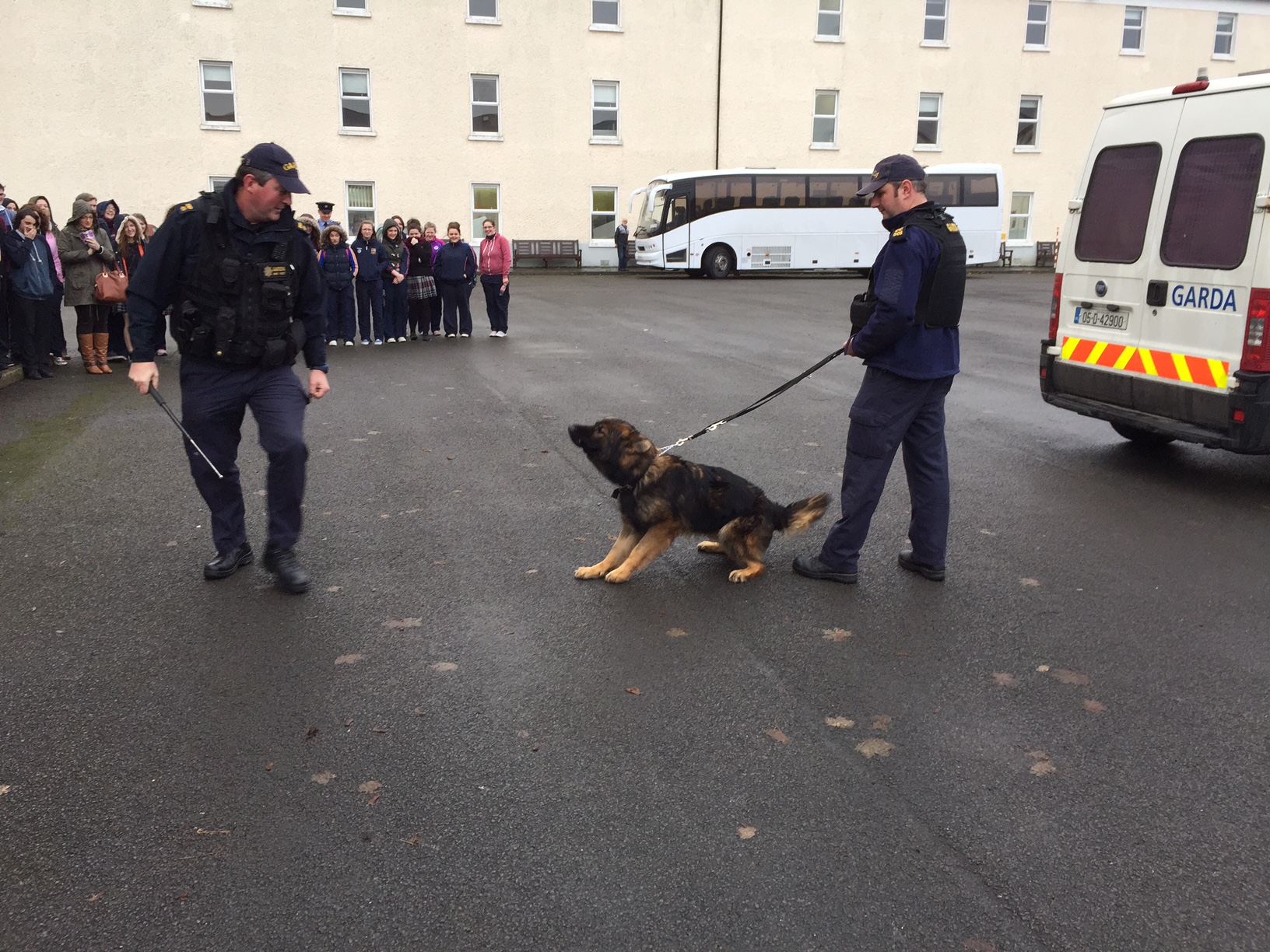 On Wednesday 17th December, Transition Year students travelled to the Garda College, Templemore to partake in a Road Safety Seminar which was presented by experienced members of the Tipperary Divisional Traffic Corps.
We arrived at the College and we all received an introduction as to the day’s programme. As we entered the College, our attention was drawn to the Roll of Honour of Gardaí who lost their lives in the line of duty. The first part of the Seminar dealt with the safe and legal requirements regarding modified vehicles. We were shown slides of what can happen when drivers misuse their vehicles.
The instructors then moved on to Forensic Collision Investigations. The Garda involved highlighted the procedures undertaken by Gardaí when investigating a collision. The main information gained was that mathematical calculations are an important factor in every road traffic investigation. Again slides were shown which demonstrated Gardaí in the course of their duty investigating collisions and also slides outlining the damage that can be caused.
Our group was then introduced to a crash survivor named Barry. Prior to the accident, Barry was a block layer but following the accident, he is now a barber. Barry outlined to us all the events leading up to the accident and the aftermath as much as he could remember, due to the injuries that he received. He was adamant that had the Cashel Hospital been closed, he would never have made it alive to Cork Hospital. It was a real eye-opener for us all. This brought the morning procedures to an end and we retired for a very enjoyable lunch in the canteen.
The afternoon session commenced with a presentation entitled: ‘It Won’t Happen To Me’. A Bán Garda named Regina, highlighted the implications involved with exceeding the speed limit, non-use of safety belts and driving under the influence of alcohol. Once again, a slideshow was prominent in the presentation concerning the consequences of drivers and their passengers not complying with road traffic laws. There was then a brief message given by a Juvenile Liason Officer outlining her duties involving contact with juvenile offenders.
The final part of the Seminar involved a meeting with members of the Dog Unit, and of course the dogs themselves. The Gardaí involved described their role in modern-day policing. These dogs, mostly German Shepherds, are specially trained individually for detecting illegal drugs and explosives. Other duties the dogs have could include crowd control at public events and some dogs are used in everyday work such as capturing criminals. One dog attached to the drug unit, has so far detected over €8 million worth of drugs. He certainly earns his keep!
The day concluded with some of the group testing out their driving skills, or lack of them, on the fixed computer shuttle on both car and motorcycle. This was a very realistic experience and it needed a lot of coordination with your limbs and eyes to undertake a simulated driving experience. It is very fair to say that our group really enjoyed this outing as it was very informative to all involved. Many thanks to our teachers Mr. Flynn Mr. Haugh and Ms. Egan for their involvement.  (Darragh Carey Kennedy)