When it was announced by the Department of Education last week that there will be a new school for Coláiste Phobal there was great rejoicing in the school itself, Roscrea and its hinterlands.

After a six year detailed process, the good news which we were all waiting for, was announced.

In the case of Coláiste Phobal there were a number of complicating factors (mix of PLC and Second level students, various accommodation blocks in different condition) and as the school is the only post-primary school (free sector) in the Roscrea School Planning area has involved greater engagement with the school management authority to agree a long-term projected enrolment for mainstream and special needs pupils.

Coláiste Phobal is run by Tipperary ETB and serves many of the parishes surrounding Roscrea and has a very strong presence in the community with a significantly high student population.

Coláiste Phobal has a reputation of being a centre of educational excellence and this news will ensure that generations to come can avail of secondary education in a building that meets all their requirements.

The new school will be built on the existing site and will cater for 800 students. The building also provides for four ASD classes to meet the needs of more than 20 additional students.

One of the existing buildings will cater for Adult Education classes, allowing them a designated learning facility on the campus.

This is a wonderful boost to the school staff, students and Roscrea community as we come to the end of this academic year.

A Thank you from 6th Years to all school staff

All Staff in Coláiste received a lovely thank you from the 6th year students when specially made buns were delivered to the staffroom last week. They were greatly appreciated by everyone and the school crest on top of them all along with ‘Thank you, class of 2021’ was a lovely thought and gesture. 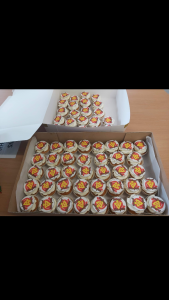 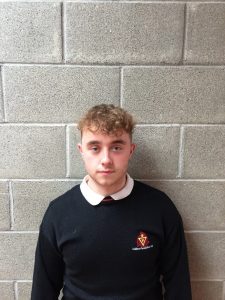 Soccer to the fore

Well done to  Áine Dooley (2nd year) and Abi Vozza (3rd year) who have been selected for the North Munster under 15’s Soccer Centre of Excellence at the University of Limerick. Both play with Killavilla United AFC. This is a great achievement and we wish them continued progress and success. 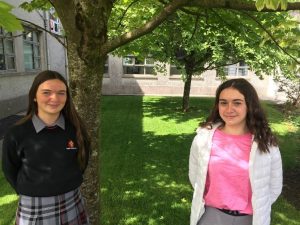 After two successful years of Girls soccer in Coláiste Phobal Roscrea that included a Leinster Regional title and numerous achievements from our players we are delighted to acknowledge our latest achievement. Kelsey Wing has excelled on the Soccer field as well as other disciplines for several years. Kelsey has previously represented Munster Schools and Munster club side where she competed in a prestigious tournament in Liverpool and she was also part of the Roscrea U15 Community Games side that made it to an All-Ireland Final.

Last year Kelsey was a key part of the Coláiste Phobal Junior Girls Soccer team who were extremely competitive, a great achievement considering it was only the second season in our history. The girls were awarded medals for their performance after qualifying from their regional group only to unfortunately miss out on getting the opportunity to play their Leinster Quarter Final due to school closures over the last two academic years.

Kelsey has always been extremely dedicated and did not shy away from the early starts that were required to progress her playing career when signing for Peamount United in Dublin. After impressing many people with her style of play Kelsey was recently approached by Treaty United to sign for them for the coming season in the Women’s National League. Treaty United are a relatively young club but have a great set up and are getting great support from near and far in bringing top level soccer back to the Limerick area.

With fixtures for Kelsey’s new club, Treaty United, just around the corner, all of us in Coláiste Phobal Roscrea wish her the best of luck for the new season and hopefully will see her in the Coláiste colours again next year. 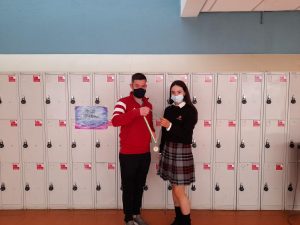