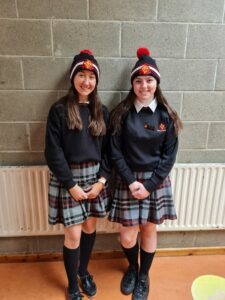 The Camogie Management and players of Coláiste Phobal Roscrea would sincerely like to thank Mr. Robbie Bergin of ‘Bergin Kitchens’ for their generous sponsorship of new Beany hats for all Camogie Players in Coláiste Phobal Roscrea. We really do appreciate the kindness shown to our students. Pictured in the photos are Andrea Scully and Caoimhe Flannery, joint captains of our Senior Camogie Team, wearing their new beany hats.

Congrats to our LCA  Students who brought home bronze medals in the ETB Mini Olympics. Thanks to Roscrea Education Centre for inviting us and Cappawhite Youthreach for hosting. We had a great day. 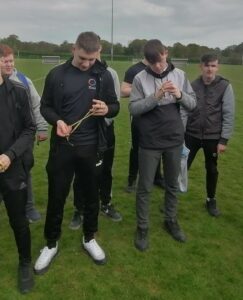 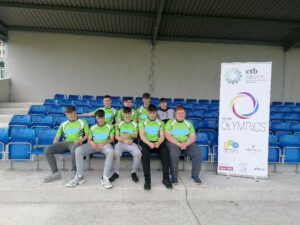 On Wednesday 27th April our Senior Girls season came to an end when we faced Maynooth PP in the League Semi final in Killavilla AFC. The game started at a blistering pace with no fewer than 8 goals being shared in the opening half. The half time score was 4-4, our goals coming from Ceola Bergin, Abi Vozza from the penalty spot, Laura Hogan and Ceola Bergin with her second of the afternoon. The second half was like a different game to the first, with defences getting on top and exerting huge pressure on the attacking players. Both goalkeepers were called into action at various stages and were up to the challenge. Mollie Dooley kept us in the game with a few very important saves. At full time, the score remained 4-4 and extra time commenced with 10 minutes per half being played. Maynooth started extra time with an early goal and that set the tone as CPR struggled to muster up the energy to get a back on terms and as time passed Maynooth extended their lead and ensure the victory. The level of skill and talent on display was clear for all to see as many girls from both sides have previously and currently play for league of Ireland U17 and U19 teams.

Our girls will look back on the game as one we left behind us, having led 4-1 at one point, however this group of girls can be extremely proud of their performances and effort all year. The determination and tenacity shown in this game was particularly admirable as the majority of our girls had played club games the previous evening but did not complain once about being tired.

It has been a pleasure to be involved with this group all year and we look forward to getting the ball rolling again in September. Special mention must also go to our two 6th year students, Ellie Feehan and Nicole Brooks, for whom this was the last time to wear the CPR colours. These girls have represented the school since soccer was established in the school and have given their all for the cause. We wish them both well in their upcoming exams and into the future. Thanks to all the parents who consistently encourage and support the girls at both home and away games and thanks must also go to Killavilla for the use of their excellent facilities whenever we need them. Thanks Mr. McCormack & Ms. Kearns. 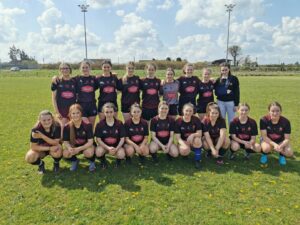 A massive congratulations to all our QQI Level 5 & Level 6 students who have just successfully completed their final coursework and exams. It was a busy year but students benefitted hugely from  the knowledge and practical skills which they gained since they started their courses last September.  We wish each of them the very best in their future, be that continuing on with further studies or entering the workplace.  For those entering the workplace, many have already gained employment locally which is a great achievement. Well done to one and all.

The Camogie management and players of Coláiste Phobal Roscrea wish to thank, most sincerely, the following organisations/companies:

Congratulations to Nadine Simplicio, 5th year who was a prizewinner in the Irish Austrian Society German Essay competition. Nadine wrote an essay in German on why we need the European Union and came 3rd in the senior category.

Prizewinners were guests of honour on Thursday 29th of April at the residence of the Austrian ambassador, Dr. Thomas Nader.

The Irish Austrian Society also present the Catriona Dowling perpetual trophy to the teacher, who in the opinion of the adjudicators, has demonstrated commitment to and enthusiasm for the essay competition. Nadine’s German teacher Eimear O Meara was runner up this year and was also presented with an award.

Congratulations to Nadine and Ms. O’Meara from all here in Coláiste Phobal. 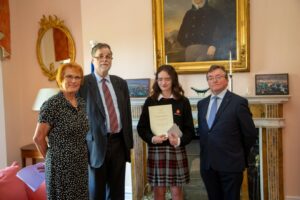 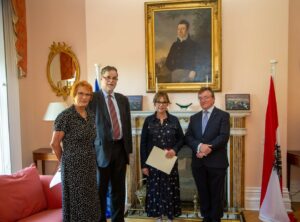 Pictured is Mr. Neil Maher (Liffey Mills) presenting a set of new training tops to the Coláiste Phobal Roscrea senior camogie team. We are so grateful to Liffey Mills for their kindness and generosity. 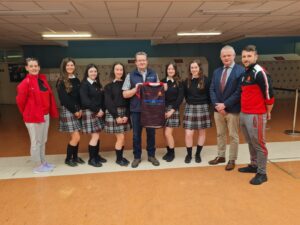 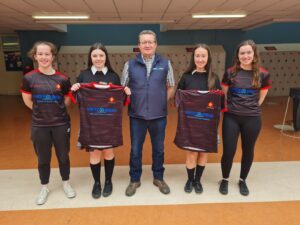