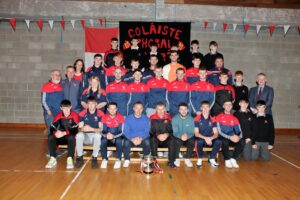 On Friday last, members and officials of Shinrone’s victorious winning championship team brought the Sean Robbins Cup to their former school, Coláiste Phobal Roscrea. The Shinrone panel included 22 past pupils from Coláiste Phobal Roscrea. 16 of those returned to their Alma Mater along with Sean Robbins. After some light refreshments the players and officials were greeted in the gymnasium to a tremendous welcome by the students from the Coláiste. Also in attendance were some retired teachers who had taught those hurlers, Mr. O. Egan, Mr. M. Maunsell, Mr. J. Haugh, Mr. W. Malone, Mr. T. McGrath, Mr. M. Buckley.

Mr. Flynn (Acting Principal) greeted the team and congratulated all concerned with the history-making team, and expressed how proud we all were of their achievements. Michael Cleary (Club Chairman) addressed the gathering and spoke of the importance of the schools and how the team had invested many years of hard work, and how many coaches had played their part along the way. Trevor Fletcher a past pupil of Roscrea Vocational School who managed Shinrone to this outstanding success spoke of his time in school and the importance of team sport and hard work. Jason Sampson (captain) who has 2 younger brothers in the school got a great reception and recounted some of his hurling and match-day memories from his school days. He recalled how hard they used to train in school, which was indeed true as Mr. Smyth recalled when he said a few words. Having worked with all those lads in their school days, Willie Smyth was full of praise for their fantastic win in the County Final. He said they had always been excellent to train right through their school days winning Munster and All Ireland medals, but always giving their all and representing their club, school and families to the highest standard.

Finally, we would like to wish Shinrone the very best of luck in the Leinster Club Campaign.