JUNIOR CERT RESULTS
Last Wednesday Coláiste Phobal like all other schools had very excited and nervous Junior Cert students awaiting the outcome of last June’s efforts. This was to be a very positive outcome for Coláiste Phobal with and exceptional set of Junior Cert results for the school. A very high proportion took all Honours papers and achieved honours in all of these exams. Honours Maths had a particularly high achievement rate with the majority achieving a high honour. This of course bodes well for attemping Honours Maths for the Leaving Cert with the lure of the extra points also in the back of students minds. Mr. O’Brien Principal outlined his pride in the achievements of all and congratulated students and teachers alike on their success.

5th Leaving Cert Applied Trip
On 9th September the 5th Year LCA class went on their class retreat to Castletown. We were accompanied by Fr. Lorcan and Ms. Hynes. Before we set off, Deirdre in the canteen set us up with rolls and after some group photos we headed off. We arrived in Castletown at 10.00 am where we were met by Derek who guided us to a room for tea and biscuits. We has a morning session and then some games with Marie. For the middle session we had a get to know you session and made friendship bracelets with Derek. After lunch we had an Art session where we painted words about what we wanted to achieve this year.. We had a meditation service followed by a prayer session to end the day. Thank you to Fr. Lorcan and Ms. Hynes for coming with us and we thanked the retreat team with some chocolates we had bought earlier. (Written by Dylan Coffey 5th LCA student).

Colaiste Phobal Roscrea advanced to the All Ireland Senior Colleges B Final after a good victory over a determined St. Mary’s side at Whitegate on Saturday last. There was little to seperate the sides during the opening half though Roscrea had a couple of goal chances that they failed to convert. Having played against a stiff breeze Roscrea would have been reasonably happy going in at half-time just trailing by one point on a score line of St. Mary’s 0-7 to Roscrea 0-6. On resumption of the second-half, Roscrea soon were on level terms after Daniel Doughan levelled matters with a well struck long range free. Roscrea were now in control and attacking from all angles and the St. Mary’s backs gave away a number of frees which Jordan Fogarty converted to give Roscrea the lead that they would never lose. Roscrea introduced Adrian Cleary early in the second half and he also had a major say in the outcome scoring a goal and two points. Further points from Jamie Dooley and Evan Fitzpatrick sealed a historic win for Coláiste Phobal Roscrea to qualify for the Colleges B final at the first time of asking, where they will face Cross and Passion Ballycastle Co. Antrim who beat St. Fergal’s Rathdowney in the other Semi-Final.  Panel  Enda Moloney, Ian Treacy, Brian Davis, Lee Cashin (Capt.),Evan Fitzpatrick, Shane Fletcher, Eoin Fitzpatrick, Josh Neville, Cian Rigney, Colman Treacy,Thomas McCarthy -(All Roscrea), Declan Cleary  J.P. Cleary, Daniel Doughan, Jordan Fogarty, Ciaran Cleary, Shane Sampson, Aaron Kirwan, Adrian Cleary, Padraig Smyth, Diarmuid Cleary – (All Shinrone), Anthony Devereux, Sean Fogarty, Mark Fanning, Donal Carroll, Dylan Maher, Daire Murray (All Moneygall), Jack Doherty, Ciaran Guilfoyle (both Ballyskenagh-Killavilla), Paul Crampton – (Clonakenny), Jamie Dooley (Borris-in-Ossory), Niall Devitt (Portlaoise), Darragh Morrissey (Kyle), David Murray (Coolderry). 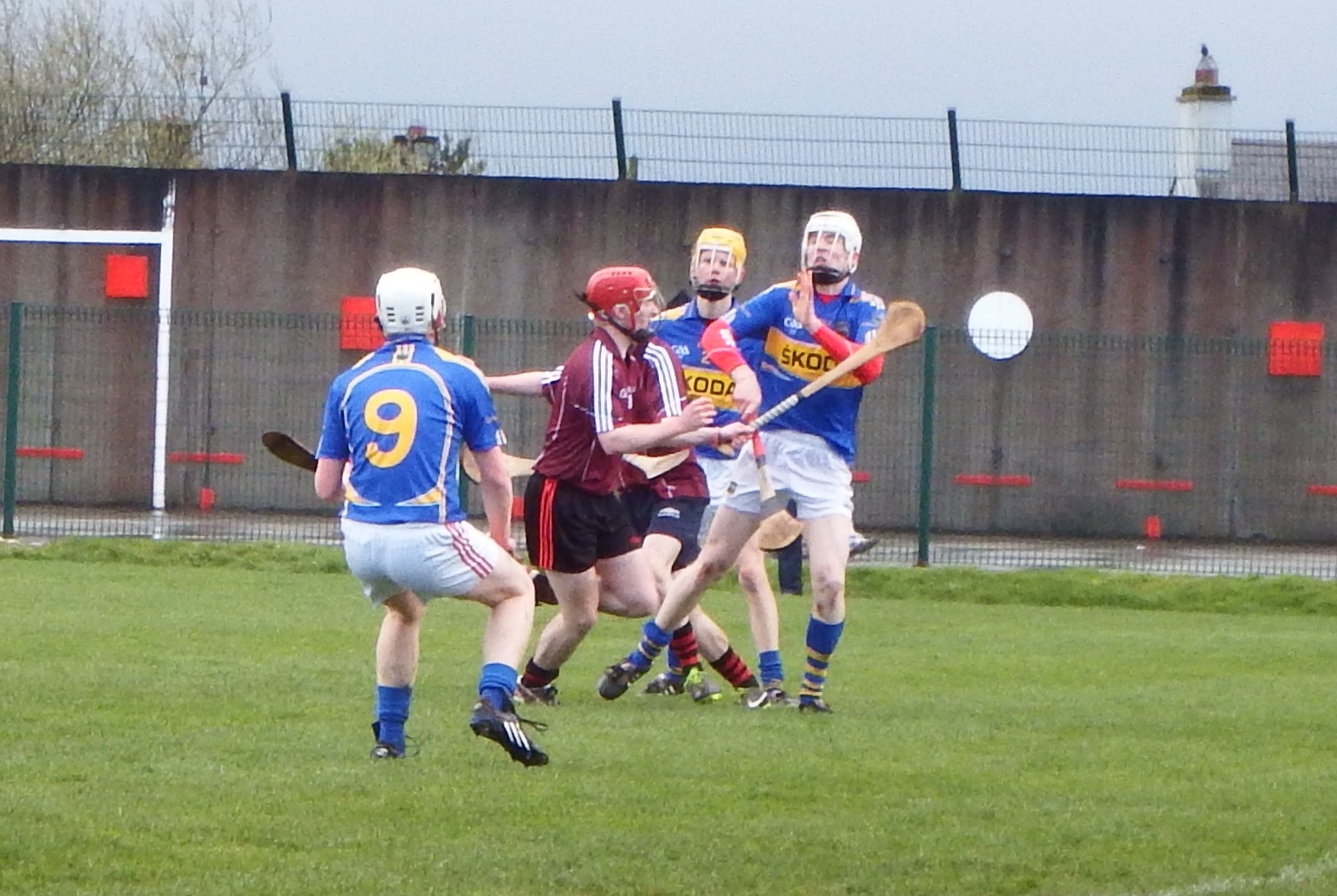 On Friday, 14th March  , the Student Council and the Green Schools Committee in our school, held a non-uniform day with a Green and Blue theme.

The purpose of the non-uniform day was to raise much needed funds for the school and to raise awareness of Green Schools and the Student Council. Each student was asked to pay €2.

We encouraged students and staff to wear green because it was close to St. Patrick’s day and because we wanted to raise awareness of Green Schools.  We also allowed them to wear blue as this colour represents water and our next Green Flag is the Water Flag.

The school was decorated nicely with colourful bunting by the Transition Year students and we placed posters around the school to notify students about the event.

We had a prize of €50 for the best-dressed student in blue or green at Senior level and at Junior level.  These prizes went to Michael Hannon (3rd Year) and Tara Dwyer (6th Year).  The best dressed staff member was Ms. Mulrooney, who won a hamper.

After the prize-giving, we planted a tree to mark the occasion.  The day was a great success and we raised €800.

We would like to thank all students, staff and management in the school for their enthusiasm and support.  A special thanks to the members of the Student Council and the Green Schools Committee and their teachers.

Coláiste Phobal are holding a fundraising concert in aid of the School Musical. This gala event will take place in the School Gym on the evening of Wednesday 9th April. The concert is open to all students from 1st to 6th year and will showcase the abundent talent that Coláiste Phobal Ros Cré has. Booking is advisable at 0505-23939 tickets cost €5.

The Senior Hurlers of Roscrea and Cashel Community School met in this all Tipperary showdown at Templemore on Saturday 8th March in the Munster B Colleges final. Cashel entered the game as favourites fielding 3 current Tipperary Minor panelists an a former Tipperary Minor at centre back and having come through a good Semi-Final win over Kilmallock. Roscrea also had a good semifinal win over St. Mary’s Newport and entered the final with plenty of belief in their own. Cashel got off the mark early with an early point and with the aid of a diagonal breeze they led by seven points to two. Roscrea had got off the mark with good points from Ciaran Cleary and Jordan Fogarty. Roscrea had a goal chance but this effort by Aaron Kirwan was well saved by their James Walsh. The ten minutes before half time were crucial especially to Roscrea who tagged on three points to go in at half-time only two behind with the wind behind them for the second half. After the interval Cashel started brightly and were intent on going for goals. It was during this period that the Roscrea backs were outstanding at defending without conceding frees. Jordan Fogarty popped over a point which was cancelled out by a Brendan Ryan effort. Roscrea were now getting on top and points from Enda Moloney (free), Jamie Dooley, Shane Sampson saw Roscrea take a two-point lead midway through the half. Cashel were still very much in the game with Josh Keane at centre forward posing a serious threat and this move paid dividends when Keane converted a penalty after he had been fouled. James Doyle added a point to push Cashel two clear again.`The next score would be vital and so it proved to be. Adrian Cleary fielded a high ball on the edge of Cashel square and found Cian Rigney with a great pass who finished low and hard to the Cashel net. Josh Keane equalised with time almost up but it was Roscrea who finished the better team and Jordan Fogarty who scored a super point from the sideline and same player sealed victory with a free in Injury time to ensure history waas made as Coláiste Phobal Roscrea were crowned Munster B Colleges Senior Hurling champions for the first time on their first year in this competition. On the day Cashel were gallant losers but Roscrea deserved their victory and are now looking forward to an all Ireland Semi-Final vs St. Mary’s Galway on Saturday 22nd March. Pane: Enda Moloney, Ian Treacy, Brian Davis, Lee Cashin (Capt.), Evan Fitzpatrick, Shane Fletcher, Eoin Fitzpatrick, Josh Neville, Cian Rigney, Colman Treacy, Thomas McCarthy, (All Roscrea), Declan Cleary,  J.P. Cleary, Daniel Doughan, Jordan Fogarty, Ciaran Cleary, Shane Sampson, Aaron Kirwan, Adrian Cleary, Padraig Smyth, Diarmuid Cleary – (All Shinrone), Anthony Devereux, Sean Fogarty , Mark Fanning, Donal Carroll, Dylan Maher, Daire Murray (All Moneygall), Jack Doherty, Ciaran Guilfoyle (both Ballyskenagh-Killavilla), Paul Crampton (Clonakenny), Jamie Dooley (Borris-in-Ossory), Niall Devitt (Portlaoise), Darragh Morrissey (Kyle), David Murray (Coolderry).
Coláiste Phobal Ros Cré 2014 Munster Champions with Trainer Mr. Smyth 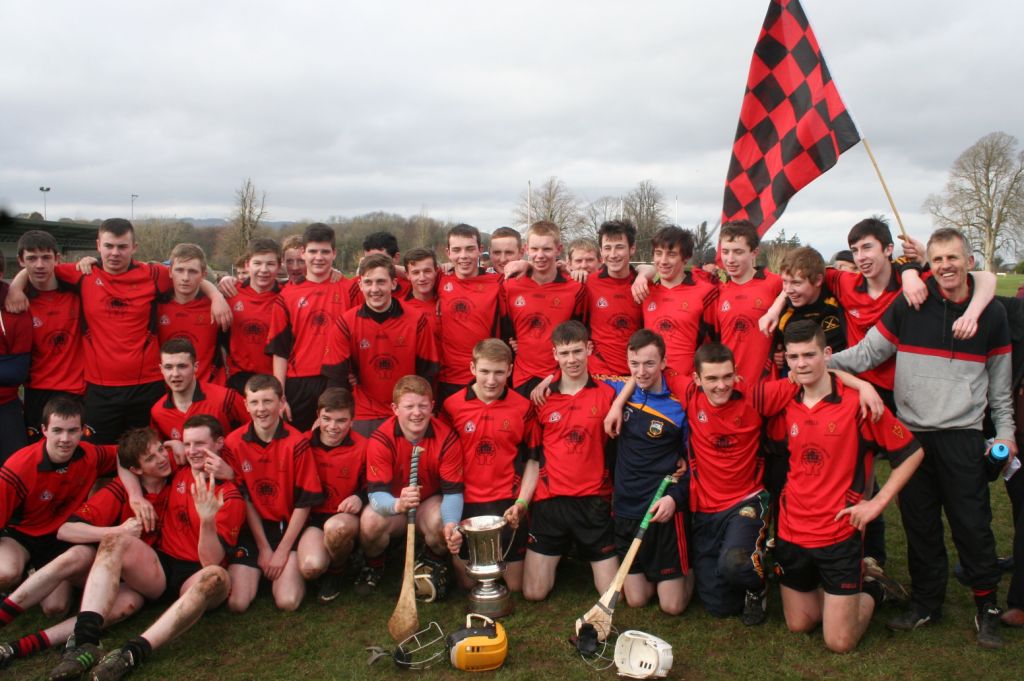