Well done to everyone who performed in our school variety concert on Wednesday 11th March in St. Cronan’s Catholic Church. The performance involved over 80 students from all years in the school and the standard was extremely high. It involved music, singing and dancing from a range of musical genres. Thanks to Ms Gothard, Ms Larkin and Mr Maher for preparing the students. The church looked fantastic and our thanks must go to Colm Wright for lighting and Michael Murphy for sound. We also thank David Guilfoyle for all his help with moving the stage sections and the piano. Thanks to all staff who helped out with the concert, preparing the students, tickets, seating etc. All the help and organising was greatly appreciated. All proceeds from the Concert are going to the Uganda Mission Fund. We are very proud of all students who took part and they are a credit to their families and the school. Well done to all involved.

First Year Girls Soccer
On Monday 2nd March our First year girls’ soccer played Loretto Kilkenny. They travelled all the way to Evergreen F.C in Kilkenny. The match was played on Astroturf so this made it easy for the girls to pass the ball around and play some good football which they did. The girls unfortunately went 2-0 down in the first few minutes as Loretto started extremely strong. After the girls conceded the 2 goals they picked up the pace of the game and created lots of chances. The girls came back to 2-2 after lots of hard work. Unfortunately, in the last few seconds of injury time Loretto got a great goal. This meant the girls would end their unbeaten run and would not progress onto the final. All the girls played really well. Our girl of the match goes to Áine Dooley. 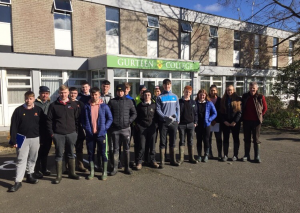 Our junior soccer girls’ team were playing against Tallaght on Monday 9th in their Leinster Quarter-Final. The girls started strong and quickly got their first goal from Ceola Bergin. The conditions were tough, it was windy and wet and the pitch was not in the best condition but the girls pushed through and at half time the score was 5-1 to us. The girls played some good football in the second half. The final score was 10-1 with Ceola Bergin and Kelsey Wing getting a hat-trick each. The girls are now into the Semi-Finals of Leinster.

On Monday 9th March the Leaving Cert Art students were doing Art all day as part of their practical.

On Tuesday 10th March there was Student Council Training. On Wednesday 11th and Thursday 12th we had French Mock Orals. The TY County Enterprise competition due to be in LIT Thurles was postponed with a view to being rescheduled for a later date. The Green Schools Bake Sale Fundraiser which was meant to happen on Friday 13th will now happen at a later date.