Well done and best wishes to all 6th years who were selected as Prefects for this coming year. 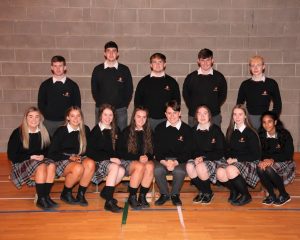 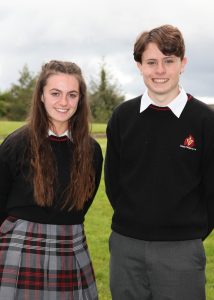 On Thursday October 1st, we were honoured with a visit from his excellency Dr. Thomas Nader and the president of the Irish Austrian Society Ulrike Scholler. They kindly travelled to the school to present prizes to two of our students, Alexa Odor and Samantha Keeshan. Both girls took part in the annual essay competition organised by The Irish Austrian Society for German students. Alexa came first in the junior section and was awarded the St Fergal trophy, while Samantha was runner up.

The other students who took part in the competition were awarded certificates also. After some refreshments, the students were presented with their certificates in the school gym.

Well done to 5th year student Caoimhe Flannery who was involved with culture day/night on Friday 18th September with Roscrea Comhaltas branch playing Banjo and Tin Whistle and also to former students who were also involved.

Well done to Naomh Bríd who recently won the Offaly Junior Camogie A final against Tullamore. Well done to current student Orlagh Phelan TY, Ms. Larkin and all former students who were on the panel. Orlagh was also on the Naomh Bríd under 16 B County final winning team.

Well done to Naomh Bríd Camogie who won the Offaly under 12 B2 Final against St. Rynagh’s Banagher and especially to our own student Saoirse Dooley 1st year who was on the team.