Congratulations to Third Year student Harry Loughnane and all his team-mates on the Tipperary Minor Hurling panel as they began their championship campaign this week with a victory against Waterford in Dungarven. They will face Clare next week in the second round of the championship.

Congratulations to Aoife Dillon in 5th Year who was recently called up to the Tipperary Ladies Panel. Aoife plays with her local club, Killavilla and also plays on our Senior Ladies team here in school.

Congratulations also to Kelsey Wing who has been called up to the FAI League of Ireland, Senior Women Squad with Treaty United. 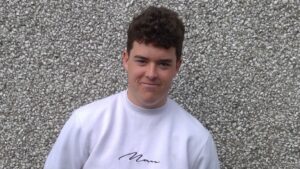 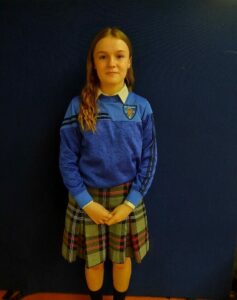 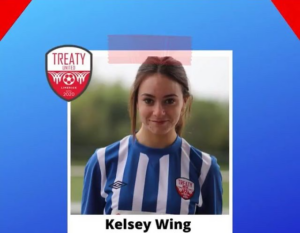 The Tipperary Secondary Schools Track and Field Championships were held in Templemore on Wednesday 6th April 2022. Coláiste Phobal Ros Cré was successfully represented by 24 students from all year groups in a wide range of events.

Lily-Anne O’Meara was first to take to the track and set a high standard for the day when she raced home in 1st place in the minor girls 75m hurdles. She followed this up with a gold medal in the long jump. Lily-Anne also brought home a bronze medal in the 100m sprint and the 4 x 100m relay. In the relay, Mya Steele got the team off to a great start before passing the baton to Lily-Anne. Lily- Anne and Tierna Conlon secured the lead in the 2nd and 3rd legs, and Kayla Dooley finished strongly to bring the girls home in 1st place. However, the relay was run over two heats, with the fastest times determining the overall positions. So despite winning their heat, the girls finished in 3rd place.

Next up was Michael Fitzgerald in the senior boys long jump. After 3 strong jumps, Michael finished in 2nd place with a jump of 5.03m. Meanwhile Marie Shanahan was busy throwing shot putt in the Intermediate girls competition. Her throw of 7.55m earned her a silver medal. Back on the track, Alannah Dunford finished strongly to cross the line in 3rd place in the Inter girls 100m. Her brother Aaron, followed this with a gold medal in the Inter boys 100m. Soon afterwards, Aaron ran a fantastic 400m race and in a very competitive home stretch, Aaron brought home the silver medal. Next up was Ramai Havatitye. A 1st year student, Ramai ran a very intelligent and strategic 800m and despite a very strong kick in the last 100m, Ramai finished in 2nd place.

Last to take take to the track was the senior boys 4 x 100m relay. Once again we were enthralled by a very competitive race. Jake McLoughlin-Thompson got swiftly out of the starting blocks and handed the baton to Kyle Dooley who gained further ground in a strong 2nd leg. He handed on the baton to his brother Graham, who rounded the bend in an accomplished manner. Michael Fitzgerald battled bravely down the homestretch and brought the boys home in 2nd place.

Many other athletes competed to a very high standard also. Damian Tomkow and Janus van der Merve threw consistently in the Junior and Senior shot putt respectively. Sandra Skozcen, Leah Harney, Maja Swiderska, Shannon Fletcher-Treacy, Julia Byczyk and Ali Gleeson all ran well in their 100m heats and also did well in the long jump. Jessica Earley, Kyle Bergin, Liam O’Reilly and Leigh Loughnane can all take pride in their performances on the day.

Many thanks to the parents and friends that came to support our athletes on the day. We look forward to a bright future for athletics in Coláiste Phobal Ros Cré when these students take to the track again. 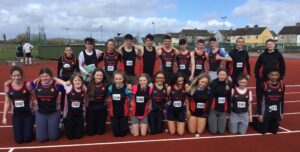 Athletes from CPR who took part in the Tipperary Secondary Schools Track and Field Championships. Missing from photo Graham Dooley. 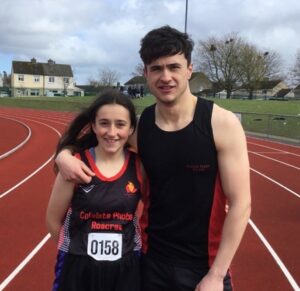 Siblings Kayla and Kyle Dooley, both of whom won medals in their relay events. 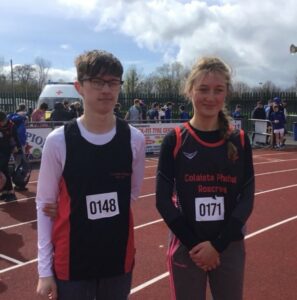 Siblings Aaron and Alannah Dunford, both of whom won medals in their sprint events.

Our girls took on St. Joseph’s from Lucan in the League quarter final on Tuesday 5th April. The girls produced a comprehensive display following a nervous start and ran out comfortable winners on a score line of 10-3. The highlight of the game for all present was a goal of the highest calibre from Ceola Bergin towards the end of the second half. Having collected the ball on the left wing at the halfway line, she dribbled past no fewer than five Lucan defenders, before slotting the ball past the keeper into the bottom corner. Goal scorers on the day were Ceola Bergin (5), Jessica Kelly, Nicole Brooks, Khya Lynch, Abi Vozza and Lucy Lee. We now progress to the League semi-final vs Maynooth PP after the Easter break. This will be another home game for us. Best wishes and a speedy recovery are sent to Kelsey Wing who suffered an injury early in the game that will rule her out of the upcoming semi-final. Thanks as always to Killavilla AFC for the use of their fantastic facilities. 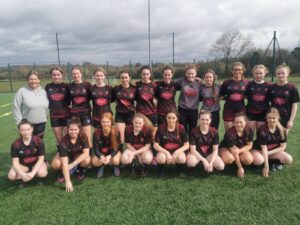 Last week in school we held our annual HOPE week series of events. We raised €150 for Ghana and €570 which will go to Charlie Bird, who climbed Croagh Patrick on Saturday last, to raise funds for Pieta House and the Irish Motor Neurone Disease Association. A huge thank you to all the staff and students involved in this fantastic initiative.

Our U15 hurlers played the first round of the Munster Championship vs Newport College on Thursday the 7th of April. In tough conditions, the game was a keenly contested affair in the first half, with Roscrea going in a point up at half time. Newport played with the advantage of a strong breeze in the second half and eventually this told on the scoreboard. In the end, Newport ran out 10-point winners.

Best on the day for Roscrea were full back Michael Loughnane, Centre back Aaron O’Donoghue and Seamie Cleare at midfield. We look forward to round two of the Munster Championship after the Easter break.